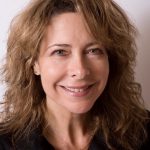 Toni Frohoff, Ph.D., is a consultant as well as the founder and Science Director for TerraMar Research. She is an ethologist and behavioral biologist who has specialized in cetaceans – and more recently, elephants – for over 30 years. She has distinctive expertise in both studying and addressing the psychological wellbeing and communication of cetaceans in captivity and in the wild with an emphasis on the impacts of human interaction. She is also recognized for her studies on human interaction with sociable groups of cetaceans in the wild – as well as “solitary-sociable” orcas, belugas, and bottlenose dolphins. Toni has a doctorate in Behavioral Biology, an M.S. in Wildlife and Fisheries Sciences, and a B.S. in Psychology. When she moved to Santa Barbara, she created POD (Protect Our Dolphin Neighbors), a project of Terramar.  She worked as the Science and Campaign Director for Elephants and Cetaceans with In Defense of Animals for four years. Toni continues to consult for a variety of private, government, and nonprofit organizations where her work has contributed to the revision and implementation of management and legislation protecting animals in captivity and in the wild in more than a dozen countries. To see some of her media work, click here and to review select publications, click here or visit the ResearchGate link at the bottom of this page.

Terramar’s mission, to advance interspecies science and advocacy for the benefit of animals and nature, has been largely driven by Toni’s groundbreaking work. Having formalized the concept of Interspecies collaborative research (Frohoff and Marino), her work promotes respect for the agency and wellbeing of the animals she studies and learns from. She has co-authored two books on cetaceans: Dolphin Mysteries: Unlocking the Secrets of Communication  (Yale University Press; 2008, 2010) and Between Species: Celebrating the Dolphin-Human Bond  (Sierra Club Books, UC Press; 2003). She has written numerous scientific papers and popular articles and has contributed to more than two-dozen books and encyclopedias.

Dr. Frohoff lectures widely at venues ranging from The Smithsonian Institute, the TED Global Conference (Oxford, 2010), The Symposium on Interspecies Interdependence in Belgium, and grade schools to universities. Toni’s research is frequently featured in popular and scientific books and journals and in the media (including being featured in a New York Times Magazine cover story, Esquire Magazine, Santa Barbara Magazine, Smithsonian and Time magazines, Discovery, Nature, the BBC, NPR, Animal Planet, and National Geographic.

Toni expanded her focus to highlight elephants due to their similarities in life-history traits as keystone species in the wild as well as their similar iconic status and plight in captivity (what she has termed, “Blackfish Behind Bars”. Her formal work with elephants began in 2006 with a trip to East Africa where she documented various human-elephant relationships and contributed to research conducted by Iain Douglas Hamilton regarding emotions in elephant. Since then, she has collaborated with notable elephant researchers, conservationists, and captivity-welfare specialists and advised and worked with organizations and agencies towards their protection.  More recently, she has co-authored a book chapter, Interspecies Ecocultural Identities in Human-Elephant Cohabitation (2020, Routledge Academic Publishers), with Terramar’s Elizabeth Oriel. She is also collaborating with Oriel who is leading the Wild Ambassadors Project.

In 2010, Frohoff initiated the first intensive study of the behavioral ecology of dolphins in the Santa Barbara region of California. This research is an important component of POD (Protect Our Dolphin Neighbors) an educational, scientific, and community-based organization. Frohoff is also Senior Research Advisor for the Whale Stewardship Project, where she has studied free-ranging solitary beluga whales with Catherine Kinsman. She also co-created Wild Wisdom, which builds bridges of multi-species wisdom towards the restoration of broken relationships between human and non-human animals and the living systems around them.

Dr. Frohoff’s research is unique in that she has studied the impacts of human interaction on so many species of cetaceans in so many different contexts. As part of her numerous assessments of the behavior and welfare of cetaceans in captivity, Toni has pioneered the first studies on the effects of petting and swim programs on captive cetaceans. She has examined the effects of human interaction on sociable groups of cetaceans in the wild as well as “solitary-sociable” orcas, belugas, and bottlenose dolphins. Frohoff has also served on a variety of boards, task forces, and committees; currently most involved as an Advisor to the Whale Sanctuary Project as an advisor.

Other participation has included the USFWS’ Technical Consultant Group on Southern Sea Otter Recovery, Advisory Group for the Reintroduction of Keiko to the Wild, Washington Department of Fish and Wildlife’s Wildlife Diversity Advisory Council, The Canadian Department of Fisheries and Oceans’ Orca L98 Scientific Panel, the NMFS’ Ballard Locks Pinniped-Fisheries Task Force, Board of Directors for the creation of the Bainbridge Island Wildlife Rehabilitation Shelter, the Mexican Ministry of Environment’s Natural Resources and Fisheries’ Programa de Recuperacón de Especies Prioritarias, and the Scientific Consultant Team for Fundación Promar in Costa Rica. 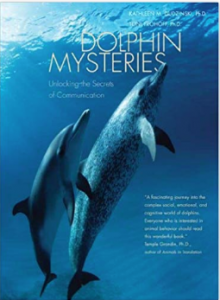 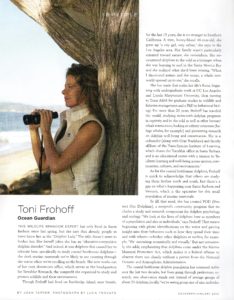 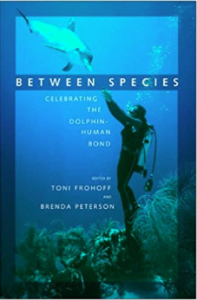 Between Species: Celebrating the Dolphin-Human Bond