TONI FROHOFF IDENTIFIES THE ORCA AT SEA WORLD AS A VICTIM, NOT A “VILLAIN”
(MSNBC, February 25, 2010)
Read the article Inside the Mind of a “Killer Whale”. 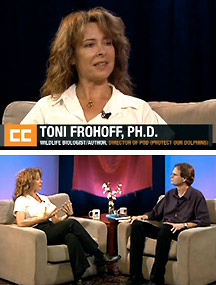 (February 26, 2010)
Toni Frohoff was interviewed on “The Creative Community” TV Show by David Starkey, Santa Barbara’s poet laureate. Toni spoke about her years of research on dolphins both in the wild and in captivity, as well as the launch of her new non-profit, Protect Our Dolphins (POD). See the interview here.

TONI FROHOFF INTERVIEW ON LUNA, THE ORCA WHALE
(November 28, 2009)
Toni Frohoff was interviewed (along with Marc Bekoff and Temple Grandin) for an exclusive web article about “Luna”, the young whale separated from his mother and pod in a remote British Columbia inlet. Toni was a scientific advisor and liaison as Canadian government officials, tribal peoples and scientists attempted to find a safe resolution to Luna’s difficult situation. Read the article here.

AT UCSB: THE COVE: FILMING AND THINKING THROUGH THE DOLPHIN-HUMAN INTERACTION

(November 4, 2009)
With Toni Frohoff, Ph.D.. (Marine Mammal Biologist) and Simon Hutchins (Expedition Director on The Cove) and Moderator: Janet Walker (Film & Media Studies, UCSB). See the event overview and the read the subsequent paper by Dr. Walker. Sponsored by the Carsey-Wolfe Center for Film, Television and New Media, the Dept. of Film and Media Studies, and the IHC’s Oil + Water series.

A KILLER CASTING CALL FOR THE COVE
(September 1, 2009)
At a recent screening in Santa Barbara, “The Cove” Producer Charles Hambleton spoke of the ways people can change the practice, and he and dolphin expert, Dr. Toni Frohoff, answered questions. Read the article here in the Santa Barbara Independent.

THE COVE SANTA BARBARA PREMIERE:  JEAN-MICHEL COUSTEAU & TONI FROHOFF
(August 29, 2009)
TerraMar supports the Sundance-award winning film, “The Cove”, with Toni Frohoff and Ocean Future’s Jean-Michel Cousteau introducing the film on its premiere at the Plaza de Oro Theater.  Each ticket purchased helps to send a message to both the movie industry and the people who have the ability to put an end to this massacre that will begin again in September unless something more is done. On the second night’s showing of The Cove, The film’s Associate Producer, Charles Hambleton and the movie’s Expeditions Director, Simon Hutchins, joined Frohoff and Cousteau.

TONI FROHOFF INTERVIEWED ABOUT WHALE WATCHING FOR ANIMALTOURISM.COM
(August 17, 2009)
Toni Frohoff was interviewed for Animaltourism.com’s blog about “What is Collaborative Whale – Watching and Wildlife Viewing?” Read the interview here.

TERRAMAR AT WILDLIFE CONSERVATION NETWORK EXPO
(October 3, 2009)
TerraMar will be an associate exhibitor at the Wildlife Conservation Network conference in San Francisco. For details on the conference, please click here.

TERRAMAR MOVES MAIN OFFICE TO SANTA BARBARA, CALIFORNIA
(May, 2009)
TerraMar Research is transforming to TerraMar Institute of Research and Learning and relocating our main office to Santa Barbara. Near a local marine mammal population facing unique challenges and adjacent to University of California Santa Barbara, we can now improve our local efforts to protect wildlife and provide enhanced educational opportunities. However, we continue to maintain a presence in the Washington State area and will continue our national and international work as well. 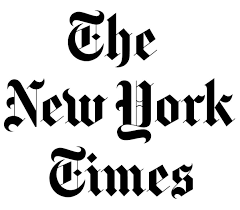 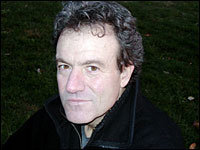 TONI FROHOFF FEATURED IN NEW YORK TIMES MAGAZINE COVER STORY ON BAJA WHALES
(July 8, 2009)
Toni Frohoff’s work with whales and other marine mammals was highlighted recently in a New York Times Magazine cover story by Charles Siebert . In the article, Watching Whales Watching Us, Siebert explores the world of the gray whale in their breeding grounds, the lagoons of Baja California, Mexico. Frohoff’s research and perspectives on interspecies communication figure prominently in the narrative. 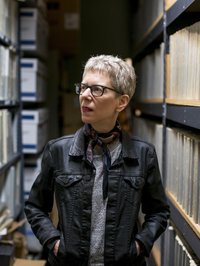 TONI FROHOFF INTERVIEWED ABOUT BAJA WHALES ON NPR’s FRESH AIR
(July 12, 2009)
An interview with Toni Frohoff and journalist Charles Siebert aired July 13, 2009 on the nationally-syndicated radio program, Fresh Air, from National Public Radio. Many of the topics explored in The New York Times Magazine article, Watching Whales Watching Us(See July 11, 2009), were discussed in depth, as well as the plight of captive chimpanzees. Listen to the interview here.

EARTH DAY 2009!
(April 19, 2009)
We ventured to Santa Barbara, California, for the 2009 Earth Day Festival.  We are also grateful to Patagonia for their generosity in supporting this event.

EMERGENCY ASSISTANCE NEEDED FOR SOLITARY ORPHANED BELUGA WHALES
Solitary, orphaned beluga in Eastern Canada needs your help now. As you read this, baby beluga “Q”, as he is known, is trying to survive without his mother, with no other belugas in sight. He is only one of an increasing number of lost belugas who, every year, stray from threatened and endangered populations and show up in our busy harbors, thousands of kilometers from their families. These belugas need our help – and the Whale Stewardship Project has a plan – but they need your immediate support. Read more about Q here.

NEW BOOK!
As we continue to update our new website, we will review and share news of many publications, DVDs, and audio CDs. 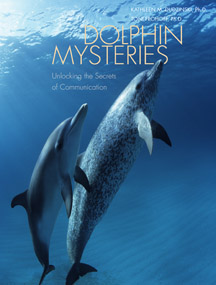 BOOK RELEASE!
Toni’s new book with co-author Kathleen Dudzinski (foreword by Marc Bekoff) is now available at your local bookstore or at www.dolphinmysteries.com“This enthralling book takes us into the dolphins’ world beneath the sea to discover details of their lives, their methods of communication, and how they interact with one another and with humans. Drawing on decades of firsthand research, the authors unveil one of the most intimate and scientifically accurate portraits of dolphins to date.” ~Amazon editorial review
Click here to visit the Dolphin Mysteries website and to view a video about the book.

The following book has just become available: The Encyclopedia of Tourism and Recreation in Marine Environments. 2008. Edited by Michael Lück. CABI Press, Wallingford, UK. We are very excited about this book as it fills a much-needed niche in the library of any marine professional or enthusiast. Also, our Research Director, Toni Frohoff, contributed a section titled, “Welfare of Captive Marine Wildlife” which discusses the welfare of marine non-mammals (such as fish, penguin, octopus, sharks) as well as mammals.

RECENT JOURNEYS
AN ANIMAL PLANET ~ ESPECIALLY IN IRELAND!
Toni just returned from New York where she worked with Animal Planet for an upcoming television show, exploring the world of people and animals whose lives are deeply touched by one another. 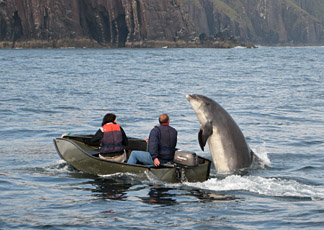 In addition to seeing wonderful colleagues again, she met many wonderful new people from various disciplines. Suzanne Chisholm also showed the beautiful and poignant film about a solitary, sociable orca she made with Michael Parfit, “Saving Luna”, on the eve of its debut in Cannes (www.SavingLuna.com). The opinions and perspectives shared varied at times, but one thing that everyone enthusiastically agreed upon is that dolphins deserve more consideration in our global society. Fungie truly is the rock star of sociable, solitary dolphins. Should they all survive close contact with people for at least 25 years as Fungie has (bottlenose dolphins can live more than 50 years but solitaries often seem to die untimely deaths). Perhaps other dolphins knew about the conference in Dingle since other dolphins themselves descended upon the harbor in great numbers during our visit. This was apparently unprecedented and it was superb to watch Fungie cavorting with others of his kind … a truly rare event, especially for a ‘solitary’ dolphin!